By Posted byAlexis Le Marec Updated on January 20, 2023
Leave a comment on Fortnite’s return to iOS in 2023

(This is a translation of an original PlanHub article)

Despite being banned from the App Store, Fortnite should be able to return to iOS in an alternative store.

On Twitter, the head of Epic Games, Tim Sweeney, just announced the return of Fortnite on iOS in 2023. Banned since 2020 for opposing the 30% tax that Apple levies on each app and transaction made in them, Fortnite will take advantage of the recent European decision to force Apple to allow alternative app stores. 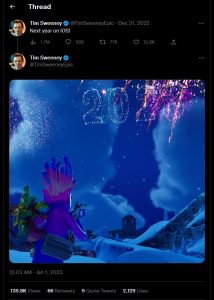 For now, no date has been announced, but it’s normal, Fortnite now depends on the launch of these famous new stores that will compete with the Apple App Store.

However, it is difficult to know if this return will concern Canada. The European Court’s decision only concerns Europe. Apple could therefore be tempted to apply this decision only in this territory.

Epic Games may have filed a lawsuit in the United States to oppose Apple’s 30% tax, but American judges have been less open than Europe on this issue.

(Translation of an original PlanHub article) Bad news, the iPhone 15 Pro and its Max version will cost more. Several factors can explain this price increase, here are a few. Cover image credit: Apple If you’re waiting for the iPhone 15 Pro, you’re going to have to save a little more in order to afford …

END_OF_DOCUMENT_TOKEN_TO_BE_REPLACED

Apple forced to open the iPhone to competition in 2024

(Translation of an original PlanHub article) Apple has a year before it has to comply with European Union directives. Apple will be forced to open up the App Store, iMessage, Apple Pay, Webkit and even its Airtag feature to competition, should Canadians expect any changes? Cover image credit: Apple Are these going to be tough …

END_OF_DOCUMENT_TOKEN_TO_BE_REPLACED

(Translation of an original PlanHub article) The next iPhone could bring many advances. In addition to its a17 bionic processor engraved in 3nm, it should evolve and offer a new design. Image Credit: PlanHub The upcoming iPhone 15 Pro and iPhone 15 Pro Max are expected to come with new technologies to make the competition …