Updated on April 8, 2022
PlanHub is an innovative search engine offering the easiest way to compare mobile and internet plans in Canada.
Leave a comment on Nothing Phone 1 Officially Announced

On March 23rd 2022, the Nothing Phone 1 was officially announced to the public. In case you haven’t heard, Nothing is a new tech company that was founded by Carl Pei, one of the co-founders of OnePlus. So far, their only product is the Ear 1, a pair of wireless earbuds. Although information about the Phone 1 is being kept very secretive, we still have a bit to work with. In this post, we’ll go over everything we know about the Nothing Phone 1 so far, and make a few predictions to fill in the gaps.

What’s Confirmed About the Nothing Phone 1?

Nothing announced their Phone 1 in an official tweet with an expected release date of Summer 2022. The first Nothing phone will run on Android, and use a Qualcomm Snapdragon processor. Aside from that, a leaked image suggests that the Nothing Phone 1 could contain some transparent design elements, as well as light strips along the back. Ahead of its release, Nothing also released a few images of its OS in action: 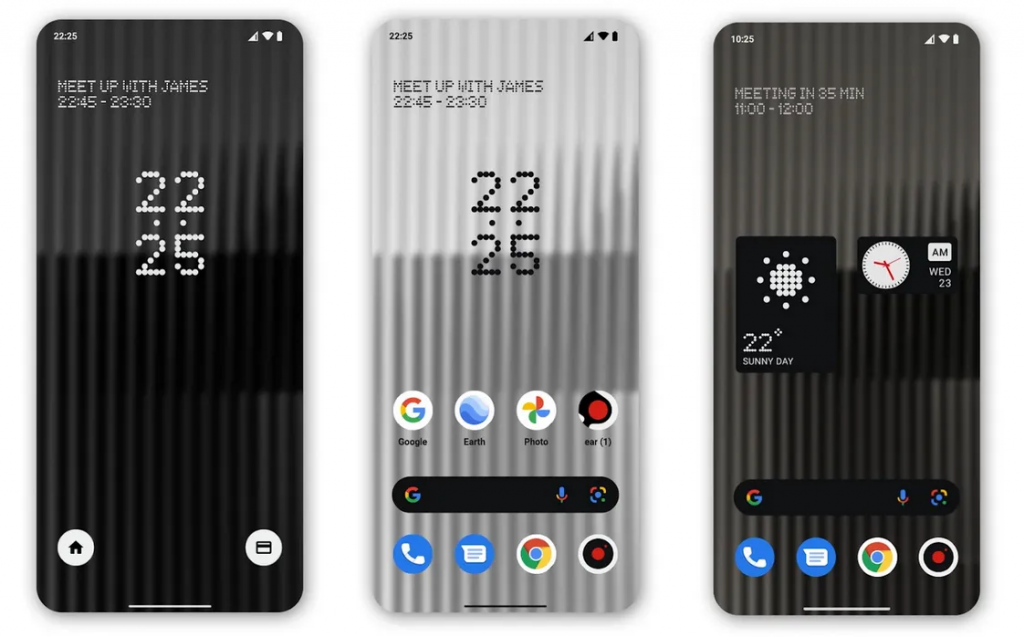 Nothing’s simplistic design is both unique and highly stylish. The digital clock font and vertical lining background make the Nothing Phone 1 seem both retro and futuristic at the same time. Pei and Nothing’s goal is to provide the essential Android experience, rivalling even the most successful smartphone companies in the market. Although it initially seemed like Nothing was going to rival OnePlus, it now looks like they are going after the likes of Google and Apple.

With so little confirmed about the upcoming phone, it leaves a lot of room for speculating and making predictions. Currently, we have no official announcement or credible leak about the Nothing Phone 1’s expected price. However, we can try and speculate based on the price of their earbuds. The Ear 1 costs $129, a competitive price for wireless earbuds that include premium features like noise cancellation and a 34 hour charge. With that in mind, we can expect the Nothing Phone 1 to cost less than its competitors, while trying to deliver just as much. We expect it to cost around $400-$500 CAD.

In terms of features and specs, we know that the Qualcomm Snapdragon processor is capable of great things. We definitely expect the Nothing Phone 1 to include 5G compatibility, and a battery around 4000 mAh. If it has these features, it doesn’t even need many more premium features like 120Hz refresh rate or 4K camera. As long as Nothing’s first phone contains one or two of these features and is offered at an affordable price, that would honestly be enough. We don’t expect it to have a stronger camera or battery life than the latest and greatest from Samsung or Apple. However, if it can provide a unique and decently powerful smartphone experience at a price customers can appreciate, we expect it to be a huge success.

If you’re excited for the Nothing Phone 1, you’ll sadly have to wait until the Summer! In the meantime, PlanHub can help you find an Android phone today. If you’re interested, you can get started on our phone brand page. Here, you can learn more about general information, prices and specs for all the industry’s latest smartphones. If you find one that resonates with you, consider using our mobile plan searching tool to pair it up with a cheap and powerful phone plan!

END_OF_DOCUMENT_TOKEN_TO_BE_REPLACED

Back to school: Best cell phone plans for students

As students across the country gear up to get back to school, one question hangs over their heads: Which phone should I get for the new year? Fortunately, most Canadian providers have some great offers for students. This article will be focusing on the best cell phone plans for students. These deals are great for university …

END_OF_DOCUMENT_TOKEN_TO_BE_REPLACED

Fonus Mobile is a mobile virtual network operator (MVNO) that offers unlimited data plans. Fonus Mobile claims to use the AT&T network to provide service to all of its clients. Founded in 2019, the California-based company offers unlimited calling and texting to over 50 countries around the globe.  This prepaid carrier only has one plan …