MVNOs in Canada: A Guide

By Posted byPlanHub.caLast updated February 22, 20211 Comment on MVNOs in Canada: A Guide

Mobile Virtual Network Operators (MVNOs) are perhaps the biggest change that may be coming to the Canadian Wireless Industry. As the CRTC’s public hearing on the issue in mid-Febuary 2020 draws near, now is a good time to look at what an MVNO is and the potential impact on the Canadian market.

The wireless landscape in Canada is already changing rapidly : new devices are being released with 5G and e-Sim support, and increased data allowances with plans including and up to unlimited data with the Big 3 (Bell, Rogers and Telus) have already been introduced.

These changes have also resulted in an upward increase in the plan prices – especially with the Big 3. The cheapest BYOD plan with either of these three today costs a minimum of $65 with unlimited data. By the time you add in financing for a new device and any additional services you might need, your mobile phone bill has climbed steeply upwards of a $100 dollars a month!

Does everyone need unlimited data and a $100 / month plan? Probably not. So what are the options for the more economically minded amongst us? MVNOs may be a big part of the answer.

What is an MVNO?

A Mobile Virtual Network Operator is a wireless communications provider that doesn’t own the network infrastructure over which it operates, as opposed to a Mobile Network Operator (MNO) who owns it.

An MVNO typically enters an agreement with a mobile network operator (MNO) to rent or lease the usage of its network services and then sets their own retail prices independently. Since an MVNO doesn’t have to build and maintain the network infrastructure, it can often charge a smaller fee for its services. Think of an MNO as a company that builds and maintains a 6 lane highway and then leases the use of 3 of those lanes to another company (the MVNO). Since leasing 3 lanes is obviously cheaper than building and maintaining the entire highway, MVNOs are able to offer their users better rates and a wider range of plan and price options.

But, you might ask – doesn’t buying services from a company leasing the infrastructure have any disadvantages? Wouldn’t you want to buy services from the company that built the network?

It depends. Here’s why:

Advantages of MVNOs in the market:

For long, a major criticism of the Canadian Telecom market has been the woeful lack of competition. The Big 3 (Bell, Rogers and Telus) and their subsidiary MVNOs (Virgin, Fido, Koodo, Lucky, Chatr and Public Mobile) dominate the marketplace and are able to set the prices. Many allege that this is why Canadian Telecom prices are amongst the highest in the world. SaskTel and Videotron have emerged as viable alternatives in some provinces and we see that plan prices in general, even from the Big 3 are more competitive in those provinces (e.g. Saskatchewan and Quebec) than elsewhere in the country.

One of the barriers of entry for new companies in the telecom space is the vast amount of capital that is required to build a new network and to maintain it. Advocates of MVNOs hope that by making it possible for service provider companies to lease network usage from MNOs, it will allow for greater competition in the marketplace and benefit customers through improved service and lower costs. It is a win-win situation because it allows MNOs to lease unused capacity on their network and get a reasonable return on their investment as well.

Leading from the previous point, because MVNOs don’t have to maintain the network and because MNOs no longer have the pressure to turn a profit solely from their own users, both MNOs as well as MVNOs now have the ability to offer services at a reduced cost – ultimately benefiting users. All MVNOs currently in the market in Canada – Virgin, Fido, Koodo, Lucky, Public, Chatr, Fizz and Xplore Mobile – offer plans at lower rates than their parent companies which are the MNOs.

We began this article by recounting how the most basic BYOD plans with the Big 3 are now a minimum of $65 with unlimited data. But these plans do not cater either for people who do not want unlimited data or for people who would like to pay less than $65 and only for what they need. MVNOs, in order to distinguish themselves in a competitive market, cater to a wider audience who are more price-sensitive. Thus, already MVNOs such as Virgin Mobile and Koodo offer lower priced BYOD plans with lower data allowances and some, such as Fizz in Quebec and Xplore Mobile in Manitoba, offer features such as data rollover and data gifting so as to offer customers a variety of ways in which to manage their mobile usage.

Potential disadvantages of MVNOs in the market:

Limited number of phones to purchase through the carrier

Service providers rely on their market share in order to negotiate deals with phone manufacturers to offer devices on tab with their plans. Increased competition and greater market fragmentation will result in multiple players with smaller and more niche market shares and therefore it is most likely possible that not all devices will be available on tab from every MVNO. MVNOs rely heavily on setting themselves apart on their BYOD plans and hence don’t concentrate on offering device incentives. For example Fizz, a recent entrant to the Quebec market (and an MVNO of Videotron), does not even offer devices. Thus, if your preferred MVNO does not offer the device you would like, you may end up buying the phone at full price elsewhere, before subscribing to your MVNO of choice.

Because MVNOs rely on leased networks and on deals they negotiate with MNOs, MNOs could end up throttling speeds on the MVNO network during peak times to prioritize their own users. Again, this depends not only on the deal that individual MVNOs are able to strike with MNOs but also on the minimum requirements that the CRTC sets if it ends up mandating MVNOs in Canada. Hypothetically, a MVNO customer might experience lower internet speeds between 7pm and 11pm than an MNO customer if the deal that the MVNO has with the MNO (to lease their network) allows them to do so.

Traditional, physical-store service may not be available

MVNOs, almost by definition, compete on price. Hence, they are always on the look-out for ways to reduce service overheads. One increasingly popular way to offer cheaper customer service is to offer online-only services with no physical locations. Fizz is an example of an MVNO that does just that. While online service for everything can seem very convenient, it’s not for everyone. Sometimes, having easy access to a physical store is the best way to get an issue fixed.

MVNOs typically specialize in a small range of services. They may not be as equipped or able to offer a bundle of services. Thus, if you are the sort of consumer who likes having TV, Internet and home phone service and a couple of mobile phones all bundled with a single provider, then MVNOs might not be your go-to. In fact, depending on the deal you work out for your bundle, it is possible that subscribing individually to all the services you need, even if with one or a combination of MVNOs, might end up costing more than a single, bundled price.

History of MVNOs in Canada

The idea of virtual network operators (VNOs) is not new in Canada. VNOs in the Internet space in Canada have existed at least since 2015. As a result, there are over 190 ISPs Canada-wide making Internet prices in Canada much more competitive than mobile rates.

MVNOs in the mobile phone space have also been operating in Canada for years – as subsidiaries of the Big 3. What the CRTC is now considering is mandating independent MVNOs. To this end, the CRTC is now in the process of reviewing telecom service rates in Canada and is undertaking a public consultation to determine whether to mandate the Big 3 as well as SaskTel, Videotron, Shaw and other network builders to sell the use of their network at wholesale rates to other independent service providers.

However, even while this review in ongoing, Canada already has its first independent MVNO, registered with the CRTC and waiting to begin operations should the CRTC mandate MVNOs. Dotmobile is Canada’s first MVNO to complete registration with the CRTC. They have around 6,000 members that have shown interest and are close to reaching their goal of 10,000 members by February 2020. 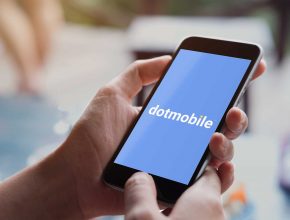 Dotmobile’s vision is simple. They want to “transform how people with moderate, changing wireless needs (seniors, youth, newcomers, people on a budget) access wireless networks in Canada”. Within their app, you will be able to manage all your wireless needs. That means no stores and no call centres! Offering e-sims and delivery of SIM Cards, connectivity to multiple partner networks, features such a data roll-over and spending limits, and even accessories and phone insurance via their dotmarketplace, dotmobile will offer a simple yet powerful solution to Canadians who are tired of the rigid and expensive plans from the large providers.

Earlier this year, Algis Akstinas, CEO of dotmobile said “We decided early on to be a full MVNO — to deploy our own cloud core infrastructure because of its scalability, flexibility, modern capabilities, and ability to offer differentiated service. Today we are one step closer to launching affordable and awesome wireless service”.

Thus, while MVNOs are definitely not an option for everyone, they are what many people need. We hope our article has helped showcase how mandating MVNOs might positively impact the Canadian telecom marketplace. Let us know how you feel about the possibility of MVNOs coming to Canada in the comments and if you think you will use their services! Follow us here, on our Twitter or on Facebook as we track developments in the CRTC’s process of public consultations in the MVNO space.