Updated on August 1, 2022
PlanHub is an innovative search engine offering the easiest way to compare mobile and internet plans in Canada.
Leave a comment on Koodo vs Telus

Koodo and Telus are two very popular mobile providers among Canadians. In case you didn’t know, Telus actually owns Koodo. They introduced Koodo back in 2007 as a flanker brand geared towards younger customers. While Telus mostly focuses on long-term contracts for adults and families, Koodo sells more pay as you go plans at lower prices. Although both brands are operated by the same company, there are many differences between them. If you’re confused about which brand is better suited for you, we’ll go over all the most important Koodo vs Telus differences to help you narrow down your choice.

Koodo and Telus provide identical coverage to its users. According to them, their network provides the most extensive coverage in Canada, and reaches 99% of the Canadian population. It manages to reach more remote and rural locations than its competitors, and provides 5G access to many locations across the country. Whether you sign up with Koodo or Telus, you’ll gain access to the same state-of-the-art coverage. To see more specifics about their coverage and see how they compare to other Canadian providers, feel free to check out our national coverage map. 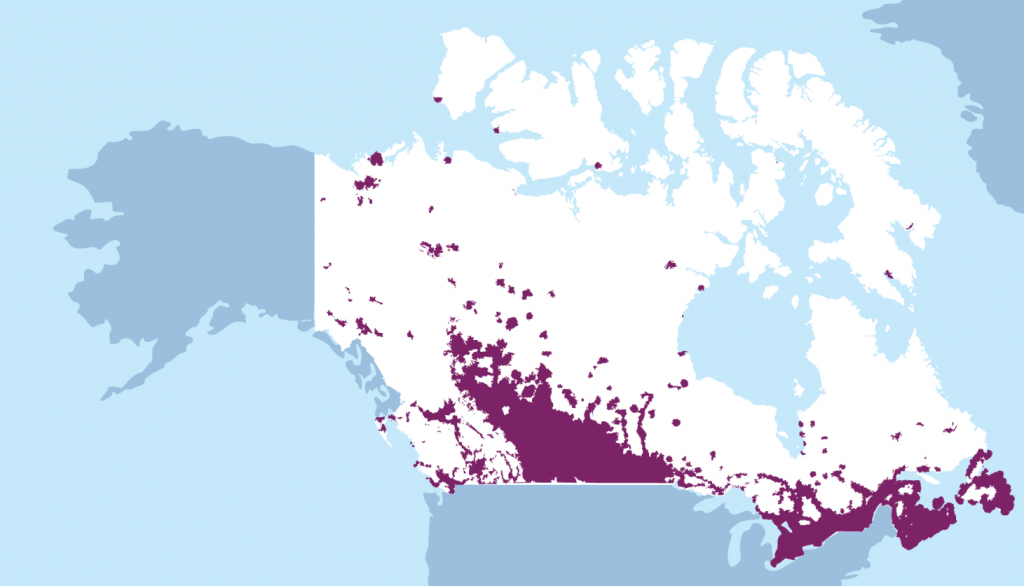 Telus is the youngest provider of the “big three”. Founded in 1990, Telus was formed as a privatization of the crown corporation known as Alberta Government Telephones (AGT). By 1995, it absorbed Edmonton’s main telephone provider (EdTel) and became the sole provider in Edmonton. Finally, in 1996, AGT and EdTel were replaced by Telus, which went public as a consumer brand. After moving its headquarters to Vancouver in 1999, Telus quickly grew a large following. Recently, Telus has invested billions of dollars towards connecting British Columbia and the rest of the country to fibre optic internet and 5G access. Although their history isn’t as long and detailed as Bell or Rogers, Telus Canada has been a dedicated provider since the beginning, and continues to be one to this day

After Bell and Rogers introduced their own flanker brands with Virgin Plus and Fido, Telus decided to start one of their own. In 2007, Telus formed a partnership with the American provider Amp’d Mobile. Amp’d sold affordable plans towards university and college students, but their partnership didn’t last very long. While Virgin Plus and Fido continued to gain popularity, Telus felt the pressure to introduce a proper flanker brand aimed towards younger customers. Finally, Koodo was established in 2008. Although they entered the flanker competition later, Koodo still managed to become very popular. The provider has always targeted younger clients, while Telus is more geared towards adults and families. If you’re still curious about the brand, make sure to read through our page on Koodo Mobile.

Although there’s some crossover between the plans offered by these two companies, they mostly sell very different plans from one another. While Koodo is more focused on affordable plans for college students and young adults, Telus’ plans are aimed towards adults and families. Depending on what kind of plan you’re looking for, the winner of the Koodo vs Telus debate could easily be decided:


As you can see, Koodo tends to send lower data plans at more affordable prices, while Telus offers shareable data plans for the whole family. Still, this is just a small sample of each company’s offerings. If you’re curious about what else each brand has to offer, make sure to check out our pages on the best Koodo phone plans and the best Telus phone plans.

Are you looking for a new cell phone? Both Koodo and Telus offer tons of great deals on brand new devices. Whether you want to finance a phone or pay for it outright, both providers give you tons of freedom when buying a new cell phone. Although there are a few differences of Koodo vs Telus cell phones for sale, here are some of the latest devices which both providers are currently selling:

Both providers sell some of the latest devices from the world’s biggest manufacturers. In addition, both sell Certified Pre-Owned cell phones at greatly reduced prices. The main distinction between their phone lineup is that Koodo sells older generations of cell phones. These devices lower in price with each new release. Meanwhile, bigger companies like Telus only sell the latest flagship phones from major manufacturers.

Koodo Mobile has earned significant praise from its customers. They manage to use Telus’ advanced coverage while providing more affordable plans which younger consumers appreciate. The main problem raised by customers lies with customer service. Despite being friendly and accessible, it’s not quite as efficient as customer service from a major provider like Telus. If you ever want to see more reviews about Koodo, make sure to read up on our page on Koodo reviews.

Most Telus reviews are very positive, especially towards their mobile services. According to their customers, Telus offers some of the most attractive prices. In addition, customers seem to be very happy with their shareable data plans and 5G speeds. The most noticeable complaint against Telus is about their customer service. Since they’re a large corporation, customers can end up waiting a long time to speak to a representative, which rarely takes place with smaller companies. For more details about how customers feel, check out our page on Telus reviews.

Still torn between Koodo and Telus? In this section, we’ll introduce a few major pros and cons with each provider. We hope this helps your Koodo vs Telus decision:

For our final section, we’ll go over some frequently asked questions about Koodo vs Telus. If you still have any unanswered questions about these two brands, we’ll (hopefully) address it in the following section:

For the most part, yes. Koodo mostly offers cheaper plans that include less data. Koodo plans that provide the same amount of data as a Telus plan are offered at the same price.

Do plans from Koodo or Telus require a contract?

Some Telus plans require contracts, but all Koodo plans are pay as you go.

Do Koodo and Telus have the same coverage?
Yes, they both use the same cell phone towers nationwide.

What are the cheapest plans from Koodo and Telus?

The cheapest plan from both Koodo and Telus costs just $15/month for 250MB of data, 100 nationwide minutes and unlimited texting.

Can I purchase a phone from Koodo or Telus online?

Yes. Both providers sell mobile phones and plans entirely online, as well as in person at their stores and kiosks.

No matter which side of the Koodo vs Telus debate you align with, you’ll be in good hands. Both providers offer loads of great plans at a variety of prices. Once you understand the differences between the two brands, you should be able to identify which one better matches your needs. Of course, choosing the right provider is only the first step in finding your ideal plan. Thankfully, we at PlanHub are here to make this process easier than ever.

After clicking this little green button, you’ll be redirected to our mobile plan searching tool. Here, you’ll be able to find your next phone plan in a few small steps. First, you’ll need to answer some simple questions about your preferences. Then, our website will immediately pull up a list of the best, most affordable mobile plans that match your taste. Finally, all you need to do is choose one from the list that stands out to you. All that’s left to do is sign up and start enjoying your new mobile plan!

Koodo’s new program allows customers to select one free perk to be added to their monthly plan. Not all plans offer the same perk options, so make sure to verify that your plan offers the perk that you are interested in. You can change your Perk at any time, however, you will only be able …

END_OF_DOCUMENT_TOKEN_TO_BE_REPLACED

(Last updated on November 28th 2022) Brace yourselves, Black Friday 2022 Canada is here. In a shopping apocalypse, no one can survive because the promotional deals are usually too good to be true. As of today, not many Black Friday deals have already been announced, however, we at PlanHub are here to help you plan …